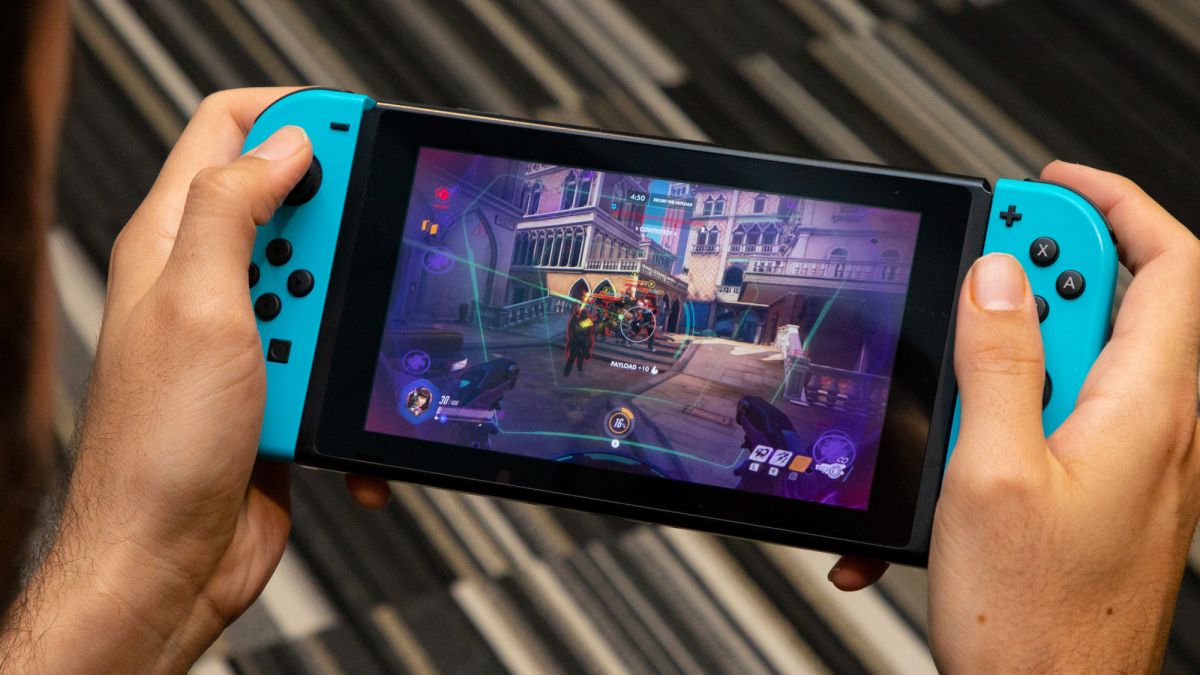 Rumors about a possible Nintendo Switch 2 are starting to kick into high gear following a red-hot year for Nintendo’s popular hybrid console. According to recent reports, the next Nintendo Switch could be a beefed-up version of Nintendo’s beloved hybrid console with new features and 4K gaming support. And with the PS5 and Xbox Series X on the way, that’s a good thing for Nintendo.

Nintendo’s next Switch likely won’t deliver things like ray tracing or 8K gaming, but a more powerful Switch could help the company better compete with the next-gen consoles that are set to debut by the end of 2020. And some rumors have pegged the Switch 2 as sporting some truly wild features, including potential dual-screen support.

Nintendo hasn’t confirmed the existence of a new Nintendo Switch model, but the latest rumors indicate that a new Switch is all but inevitable. Here’s everything we know about the New Nintendo Switch 2, including its possible release date, specs and features.

If Nintendo itself is to be believed, there won’t be any new Switch hardware in 2020. In a financial note published in late January, the company wrote, “Please note that we have no plans to launch a new Nintendo Switch model during 2020.”

That said, the Nintendo Switch 2 could launch in early 2021. Citing a Taipei-based report out of the Economic Daily News, The Edge Markets reports that a new version of Nintendo’s popular hybrid console could arrive by early next year. That was quickly followed up by a Bloomberg report that suggests that the new Switch could arrive next year complete with 4K support and an expansive new games lineup.

A subsequent Bloomberg report claims that developers are being asked to make their Nintendo Switch games playable in 4K, adding further weight to the possibility of an upcoming hardware upgrade.

Economic Daily News later reported that Nintendo was still planning a 2021 launch, and has been visiting companies in Taiwan to obtain displays for the new console.

Here’s a look at when every version of the Switch has launched so far. Looking at these days, it’s possible we could see an updated Switch by 2021 to coincide with the system’s four-year anniversary.

While there’s no official price set for Nintendo’s next Switch, it seems safe to assume it’ll cost more than the $299 base model — and certainly more than the $199 Nintendo Switch Lite. In an interview with Gamesindustry.biz, Japan-based games consultant Serkan Toto predicts that the Switch Pro will cost around $399.

The Switch Pro’s rumored specs have varied based on different reports, with some claiming that the next Switch will be a modest upgrade and others hinting at a significant power boost for Nintendo’s console. A sketchy, now-deleted 4chan post (via Inverse) suggests some major changes, including a custom Nvidia Tegra Xavier processor, a 64GB SSD, 4K video support, and two USB-C ports. This post also claimed that the Switch Pro would be a TV-only console, and won’t be playable in portable mode.

Economic Daily News also claims Nintendo is set to include a Mini-LED display in the Switch 2, which is a big leap up from the 720p LCD display included in the original. Utilising Mini-LED tech would mean better responsiveness, contrast, and energy efficiency, all of which would be more than welcome on a new Switch.

However, a forum post on Korean website Clien (via TechRadar) suggests that the next Switch might not be a huge generational leap. The poster claims that Nintendo is working with Nvidia on a custom Tegra processor based on Nvidia’s Volta architecture, and won’t include the Tegra X1+ chip that many had expected the console to feature. As a result, 4K support may not be feasible for the Switch Pro.

The current Nintendo Switch packs a custom Nvidia Tegra X1 processor, a 6.2-inch, 720p display and 32GB of storage. In August 2019, the console saw a minor refresh, which bumped the battery life from an estimated 2.5 to 6.5 hours to 4.5 to 9 hours. In our own Switch battery tests, we found that the new model lasts nearly twice as long for games such as Super Smash Bros. Ultimate.

The Nintendo Switch 2 may also feature Nvidia DLSS 2.0 support, according to an Nvidia job ad spotted by Wccftech. The posting seeks a software engineer on the Tegra team to work on “next-generation graphics” and mentions gaming consoles by name. Considering that the Switch is the only Tegra-powered console out there, it’s possible that Nvidia is conducting work on a CPU for a new model. DLSS (Deep Learning Super Sampling) is an AI technology designed to boost framerates in games, which could lead to much smoother performance if it makes its way to the Switch 2.

But improved specs could just be the tip of the iceberg for the Nintendo Switch 2. A series of code found in the Switch’s April 2020 firmware update reveals what could be support for a dual-screen console, suggesting that the next Nintendo Switch may be a two-display device.

This wouldn’t be a first for Nintendo given the company’s popular Nintendo DS and 3DS handhelds, but we’d be curious to see how dual-screen support would play into the Switch ecosystem. Perhaps you’ll be able to play in handheld mode while beaming certain content to your TV, similar to how the Wii U operated.

There are also some recent mobile GPU breakthroughs that point to a promising future for upcoming handheld consoles such as the Switch 2. Samsung and AMD are expected to be working on a new Exynos 1000 chip with AMD graphics built-in, which could give the Switch 2 a massive power boost if Nintendo decides to opt for that CPU over the aging Tegra X1 found in the current Switch.

One of the most recent notable mentions of the Nintendo Switch 2 comes from the developers of Eiyuden Chronicle, a throwback role-playing game that’s currently on Kickstarter. As spotted by Nintendo Life, Rabbit & Bear Studios mention “Nintendo’s next generation console” as one of the platforms the developer plans to release the game for. While the studio was transparent about having no inside knowledge to Nintendo’s plans, the company noted that porting the title to the relatively underpowered Switch while building it for next-gen platforms would be an expensive endeavor.

If Nintendo does make another Switch-like console, it seems safe to assume that it’ll once again allow you to play in TV, tabletop and handheld modes. But some recent Nintendo patents hint at some other interesting features that could either make their way to the new console or serve as a complementary device.

Nintendo recently patented a unique health-tracking device, which would be able to track your sleep, monitor your mood via microphones and sensors, and even change the odor of a room. Interestingly, the patented device has its own dock (much like the Switch), and seems designed to work with health-related games a la Ring Fit Adventure. It’s too early to tell whether such a device will even come to market, but it will be interesting to see if Nintendo ups its fitness-tracking game in time for the next Switch console.

What we want from the Nintendo Switch 2

Why we want a Nintendo Switch 2

The Nintendo Switch is an absolute joy of a system backed by some of the finest games Nintendo has ever released. But its hardware is starting to show its limitations more than three years after release, largely when it comes to ports of major third-party games.

Kotaku’s Ethan Gach recently got his hands on the new Switch port of The Outer Worlds, which reportedly “looks so bad on Switch I’m tempted to tell even people who have no other means of playing it to stay away.” Based on Gach’s screenshots, the port looks incredibly blurry, and suffers from framerate drops. Gamers have had similar issues with ports such as Pillars of Eternity and Wasteland 2.

While Nintendo games such as Breath of the Wild and Animal Crossing: New Horizons are optimized to look and run great on Switch, the console seems to be running into a AAA games problem. And that could prove especially challenging for Nintendo, especially with a new crop of third-party games built for PS5 and Xbox Series X that may be more graphically demanding than ever.

Nintendo doesn’t necessarily need a system as powerful as Sony’s and Microsoft’s upcoming console (the Switch has done just fine against PS4 and Xbox One), but a significant power boost could make the company’s hybrid console even more appealing for fans of big third-party franchises.

While third-party developers have done an admirable job bringing major AAA titles to Nintendo Switch, they sometimes come with too many compromises to be truly playable. As such, many of the biggest third-party games of this year and beyond aren’t currently slated for Nintendo Switch, but could make a perfect fit for a more beefed-up version of Nintendo’s console.

The Switch 2 could also be a great showpiece for upcoming Switch titles like Metroid Prime 4, Bayonetta 3 and Breath of the Wild 2, offering higher framerates and better resolutions while still being playable on standard Switch hardware. This could effectively make the Switch 2 or Switch Pro Nintendo’s answer to the Xbox One X or PS4 Pro.

Should I wait for a Nintendo Switch 2?

Considering that the Switch 2 is still a rumor at this point, we wouldn’t count on it coming out just yet — at least not anytime soon. The Nintendo Switch and Nintendo Switch Lite are at the top of our list for the best handheld gaming consoles, and we expect them to continue to get supported for years to come. So if you’ve yet to jump on the Switch bandwagon, you can do so with confidence that it won’t be replaced anytime soon.

Plus, if there is indeed a Switch 2 or Switch Pro, chances are it’ll work with your existing Switch game library. Nintendo has a history of supporting its handhelds through multiple iterations, with the Nintendo DS/Nintendo 3DS family supporting the same game library for more than a decade. Given how popular the Switch is, we expect Nintendo to take a similar approach for its current console.